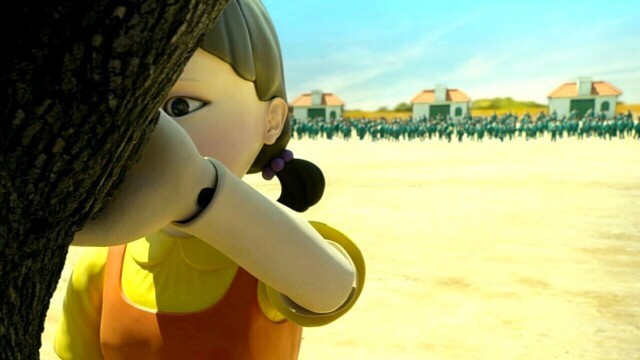 The plot of Squid Game, the famous tv series that it’s spreading all over our… poor world, is about the story of a divorced man strongly indebted that agrees to participate to a series of traditional children’s game for money. The main character finds himself locked up in an unknown location playing with hundreds of other people, indebted as him, and wrestling for their own survival. The players-prisoners are watched by guards dressed in red with different geometric shapes (Korean ideograms) on the black face shield, at the command of a Front Man. Whoever loses the game gets killed and each player’s death leads to an increased amount of money for the survivors. The creator and director of Squid Game, the Korean Hwang Dong-hyuk from Seul, started the drafting of the story when he lived with the mother and the grandmother in sever economical restraints. The plot probably comes from his juvenile stress.

From my point of view, the concern on the tv series “Squid Game” shouldn’t be focused on the violent acts that take place but rather on the moral inconsistency that’s behind the brutality.

When I was a kid, dreaming of becoming a private detective and opening my own investigative agency, I used to have my bellyful of violence from tv too, but my heroes would kill in the name of Justice or to protect innocent victims from bad guys or, at the very least, to get revenge. It’s the first time I hear about a hero that fights for his own life on the reward of a money prize.

By keeping on witnessing difficult separations and disputes over the children, situations that are followed by my investigative agency Octopus, I’m convinced that the last generation of parents is mainly composed by people too disturbed to be able to assure a healthy formation for their children. And marital separations worsen this inadequacy.

The worst thing you could do to your children is to let them suffer your economic hardships, and yet it’s getting more and more frequent the fights between ex-spouses on the definition of the divorce checks, taken care by my investigative agency Octopus, in which one of the two contenders drags the children in the dispute, making them to feel unfairly responsible.

Another dirty trick, which I witness always more frequently as the owner of the investigative agency Octopus, is the divorced parent that, instead of building up a new life and encouraging the rebuilt of that one of the children too, restrains them in his/her sorrowful and rageful loneliness, running them over with his/her unsolved pain coming from the separation.

Children of divorced parents (and not only), because of the inadequacy of the parents, are constantly driven by the urge of living in a virtual world made of socials and tv series which have an always lower educational purpose, for the exclusive sake of profit. Mala tempora currunt sed peiora parantur.