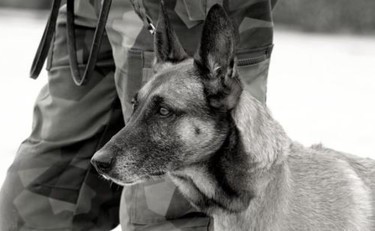 Some time ago a friend and a private detective colleague of mine, owner of a detective agency in California, ex much-decorated marine who fought in the Gulf and Afghanistan war, knowing how much I love dogs and animals in general, invited me to a memorial of a soldier dog deceased in war. I turned down the invitation bringing as an excuse my inability to fluently speak English to properly offend all the cowards at the ceremony. Professional soldiers who, even though armed from head to feet and armored like aircraft carrier, prefer to push forward a poor dog equipped only with his teeth and his misplaced loyalty to human beings. My friend didn’t entirely understand my loathing for the employment of dogs in wars, but today he admits that the soldier dogs abandoned in Kabul from the American army reveal all the dirt of the employment of assault dogs from soldiers and police force. Actually, I don’t think USA Military abandoned its dogs for an economic reason: the selection and the training of these dogs are really expensive. Nevertheless, the employment of animals in wars grosses out.

When I started my first private investigative agency Octopus in Bergamo, it occurred sometimes to receive into the office individuals with clear mental issues. To protect the collaborators of my private detective agency Octopus while I was absent, I took a male Doberman dog who I named Clyde, having in my mind to soon get him a Bonnie.

I have to admit that back then I knew very little about dogs and I committed all the possible mistakes with this creature: I sent him to a guard and defense training center, where he was abused (and we noticed that later on) and mostly he pointlessly suffered the separation from me and my wife. When he came back from the ‘damn school’, my wife, in the closing times of the private investigative agency Octopus in Milan, personally took him to a defense course.

He, the dog, had fun in the end, because he was with his foster ‘mum’, but we soon realized that he wasn’t trained to defend but to sacrificially suicide for the benefit of the owner. The assault dogs or defense dogs (or whatever you want to call them) can’t be taught a real martial art, they only learn to throw themselves onto the objectives and to bite them fiercely. This means that the dog probably will die if fighting with an armed, strong human rival who is not afraid of dogs and is not scared by their barks and teeth.

Since then, I’ve tried to tackle the issue by adopting dogs and other abandoned animals. The only dogs I rely on for my protection and that of my dears, collaborators and clients of the detective agency Octopus are the my guns hammers, which in Italian language are literally translated “cani”=dogs.

Coming back to the catastrophic retreat from Afghanistan: I don’t think it’s possible that each one of the soldiers to whom it was assigned an assault dog, didn’t take back home the slave provided (and that’s exactly how we treat animals, like slaves). Nonetheless, that wasn’t driven by a sense of loyalty but a mere economical interest.