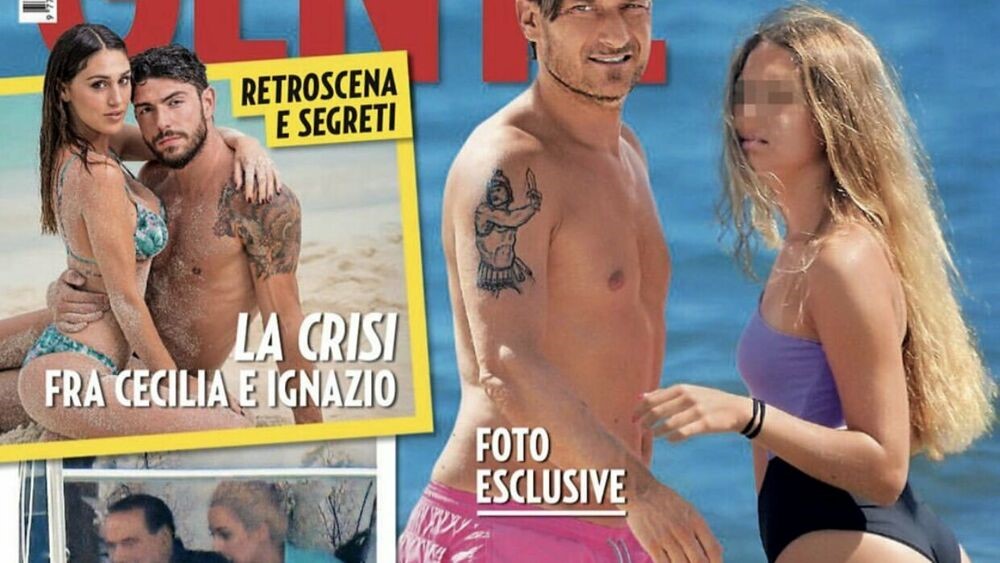 Malice is in the eye of the beholder

The thirteen-year-old girl Chanel, Ilary Blasi and Francesco Totti’s daughter, appeared on the cover of the weekly magazine GENTE in her swimwear, photographed on the beach with her father.

Next to the photo, the description states: “At 13 years old, Chanel Totti is the twin of her mother Ilary”. The director of GENTE adds on her Instagram profile “The new GENTE is out in kiosks. On the cover there’s the most beautiful couple of the summer and also the sweetest, a dad and a daughter. The super captain Fancesco Totti and Chanel that at the age of 13 is a flower and already looks like a little copy of her mum Ilary”

Personally I don’t find anything blameworthy in the photo, nor in its publication, nor in the description, nor in the fact that the girl’s parents (that I always liked) have realized the risks that their daughter could came across every day growing up and have reacted badly, throwing all their anxieties on the director of Gente with an Instagram comment: “I really thank the director Monica Mosca for her sensitivity shown by throwing my underage daughter’s backside on the cover without thinking about the increasing problem of sexualization and commercialization of teenagers”.

Unfortunately, the sexualization of their child’s body is an unavoidable process, in which the little Chanel is personally involved and has chosen a particularly low-cut swimsuit to fully enjoy the sun and the sea. And even for a little vanity, maybe still without malice.

The majority of us, looking at the girl’s photo, will find it sweet: a teenager with her dad always watchful, as the poor Francesco will have to be for the next 10 years (the centurion tattoo seems to be a warning for all the upcoming suitors of the creature).

Unfortunately, in addition to us, there are two type of disturbed people: the perverts and the at-all-costs politically correct people. The latter are worse than the peeping Tom: enough maniac to see sex everywhere, even when it’s not the case, and nevertheless still capable of finding gratification in the censure, instead of in the contemplation, as every disgusting (but honest) pervert would do.

The premature sexualization of teenagers (which I frankly don’t see in the photo of the young Chanel) is a problem very severe, which my detective agency Octopus has often dealt with.

Within a separation of the parents, the young daughters of my detective agency, experiencing the break-up with pain, often tends to sexualize themselves to involuntarily try to substitute the mother in the attempt to get back the father, or simply to resemble the post-separation behavior of the mother trying to reclaim her life. The same happens for the male child that try to take the role of head of the family with morbid manifestations of attachment and jealousy towards the mother. Mutatis mutandis: if the sons stay with the father, the daughters tends to substitute the mother through adult behaviors, and sons tends to become head of the family coming into conflict with the father.

In the above-described contexts of separation and divorce, the real danger is the abandonment of the underage children, that makes them easy preys. I always warn the clients of my detective agency Octopus and I have often avoided them the worst: for a sexual predator a divorced woman with young children isn’t a family, but a hunting field. A divorced father that doesn’t keep high the level of guard on his sons and daughters put their innocence and happiness at risk.